Richard Clauss, Hilmar, Calif., has been named the 78th recipient of the Master Breeder award of the American Jersey Cattle Association (AJCA).

The Master Breeder award is bestowed annually to a living AJCA member, family, partnership, or corporation that, in the opinion of the Board of Directors, has bred outstanding animals for many years and thereby made a notable contribution to the advancement of the Jersey breed in the United States.

View the article as a PDF. Or view it in the June 2021 Jersey Journal.

Richard “Dick” Clauss is one of the dairy industry’s most distinguished individuals. He is known the world over for his roles as 30-year chairman of the board at Hilmar Cheese and president of Jerseyland Sires. Clauss has been named Dairyman of the Year by World Dairy Expo, Guest of Honor by National Dairy Shrine, and Innovative Dairy Farmer of the Year by the International Dairy Foods Association. He is one of four men to preside over both the American Jersey Cattle Club (AJCC) and National All-Jersey (NAJ) and three to receive the Jersey breed’s Distinguished Service Award and its Award for Meritorious Service.

Long before the leadership roles and decades before the accolades, there were the cows.

“Dick Clauss is, first and foremost, a dairyman and Jersey breeder,” noted Larry Schirm, strategic account manager for ABS Global Inc. From the onset, this industry titan has operated his business with the mindset that a better dairy product for consumers and a more profitable dairy farm can be simultaneously achieved by breeding superior Jersey cattle.

With the Master Breeder award, Clauss becomes the only individual in history to receive each of the Jersey breed’s three highest honors.

Clauss and his family milk more than 3,300 Registered Jerseys in the Central Valley. Dick and his wife, Sharon, partner on the home farm and another dairy with daughters Kimberly Clauss Jorritsma and Karen Clauss Tate. Since 1995, dairy manager Danny Avila has adeptly handled the management and feeding programs at both farms. Dick and Sharon also helped eldest daughter, Kirsten, and her husband, C.A. Russell, establish a Yosemite Jersey Dairy in Hilmar.

Cows are housed in freestall barns and milked in a 50-cow rotary parlor at Clauss Dairy and a double-12 parabone parlor at Sunwest. All calves are raised at home. Corn, wheat, and alfalfa are raised as forages on 700-plus acres. Energy and supplements in the ration are purchased. The Clauss family installed a solar farm last year and are in the process of developing a methane digester. The latest venture to diversify is 110 acres of almond trees. Saplings were planted this year and are expected to yield a harvest in about four years.

Though business has taken Clauss around the globe, in his heart remains the soul of a man who started his career milking a small herd of cows on a 40-acre farm in Hilmar in the early 1950s. When his father, Hugo, was diagnosed with a terminal illness, Dick put aside his college plans to work full-time at the dairy with his mother, Valentine.

He purchased his first 20 Jersey cows in 1954 from a neighbor for whom he worked, then an additional 36 cows from another neighbor two years later. He built a new barn, bought another 37 cows, and began shipping Grade-A milk for the new All-Jersey program in 1957.

A desire to improve the genetic merit of the herd prompted Dick’s visits to New England, the “Cradle of the Jersey Business,” in the 1970s. A small group of Hilmar dairymen headed east to purchase production-focused bred heifers to improve the profitability of their herds. This initiated a westward movement of Jerseys by the truckloads, a trend that continued another four decades and gave the Hilmar crew the seed stock they needed to develop their own world-class Registered Jersey genetics.

The challenge of finding Jersey sires with adequate progeny performance data brought Clauss and Hilmar Jersey breeders Phil Fanelli and Duane Wickstrom back to New England on an impactful trip in 1979. After studying pedigrees submitted to them through a Jersey Journal ad, the trio headed east to purchase a bull that could be used as a service sire for 10 dairies in Hilmar, and, ultimately, “proven” through their group. The sire selection committee made six subsequent bull runs to New England and officially established Jerseyland Sires in 1980. It was natural for the group to choose Dick, their respected peer leader, as the inaugural president, a role he held until he officially retired in 2015.

Jerseyland Sires was a novel idea at the time and a catalyst for the formation of other young sire groups. Among the early acquisitions was Highland Magic Duncan, purchased from Master Breeder Highland Farms of Cornish, Maine, and later leased to Select Sires Inc. as a progeny-proven sire. “Duncan” topped the list of Active A.I. bulls for six genetic evaluations and has a proof that includes more than 10,600 daughters.

Over the past 40 years, Jerseyland has sampled more than 500 young bulls. Today, the organization releases about 30 bulls each year and markets semen through Alta Genetics and Select Sires as well.

Some of these bulls have been developed by Clauss Dairy Farms and carry the farm’s CDF prefix. Some have risen in the ranks and impacted the breed as sires of sons. Among them are CDF Viceroy-ET, the second most heavily used sire of sons in 2018, and his maternal brother, CDF Karbala Kwynn, ranked #9 the same year. This past year, CDF Irwin Steve ranked #2 with 122 Registered Jersey sons and JX CDF JLS Pilgrim Thrasher {6}-ET, out of a “Viceroy” daughter, ranked #4 with 94 sons.

To develop these superior genetics, Clauss has extensively used the Jersey association’s performance programs and services. Initially, this included enrollment on STEP and then REAP when it became available in 1995. Clauss Dairy Farms is a charter contributor to Project Equity, was an early user of paperless registrations, and genotypes thousands of animals each year. The dairy has used JerseyTags since July 2003 and earned the distinction of owning the 100,000th animal registered by the AJCA with double-matching ear tags. The heifer, Sunwest Carrier Mor Miss 1000000, was pictured on the cover of the May 2009 issue of Jersey Journal as winner of the campaign to promote JerseyTags.

While Clauss was growing and improving his herd, the Jersey breed and its association were growing too, thanks in part to the volume of business conducted by the Hilmar dairies and their commitment to the Jersey organizations.

“No other individual has done more to expand the number of Jersey cows with recorded identification and performance information than Dick Clauss,” wrote former AJCA Executive Secretary Calvin Covington, who headed the Jersey organizations while Clauss served as AJCA president. His influence in this area began in the late 1970s as an early user and promoter of Genetic Recovery. By enrolling his own herd in the program, he set an example and paved the way for tens of thousands of Jerseys to enter the Herd Register and provide performance data for breed improvement.

Clauss has also impacted Jersey breed growth and genetic gain through his role at Hilmar Cheese. The story of how the company was established by Clauss and 11 other Hilmar Jersey dairy producers in 1984 as a means of getting a fair price for their component-rich milk is well known. The milk marketing vision is legendary in Jersey circles.

Hilmar Cheese was largely responsible for this growth because it operates two of the largest cheese plants in the world and pays a fair price for superior milk. As longtime leader of the company, Clauss rallied the flag for genetic gain by capturing production, type, and health traits from these cows. He continued use of AJCA performance programs for his own herds and encouraged their use among supplier herds. The information these cows contribute to the domestic dairy database helps to validate genomic calculations and drive genetic gain.

One cannot separate Dick Clauss, dairy industry visionary, from Dick Clauss, Registered Jersey breeder. They are the same man, a rare individual with a gentle demeanor and an innate ability to collaborate and lead.

“He is a man of vision and practical wisdom combined with a gracious eloquence that is unsurpassed,” remarked Jim Quist, president of the California Jersey Cattle Association. “We have previously recognized him for leadership activities in milk marketing and the Jersey organization, but he built all of that on the foundation of a committed Jersey breeder and dairyman who started with his family’s dairy farm on a scale that many of us can relate to over 60 years ago.”

Value of Photography from a Producer’s Viewpoint

8 Things to Keep in Mind When Raising Jersey Heifers 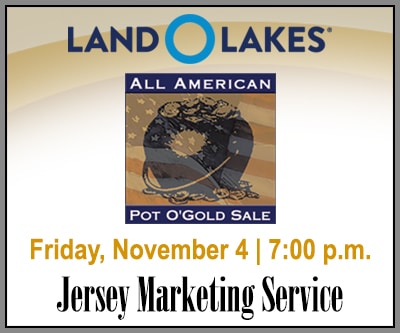